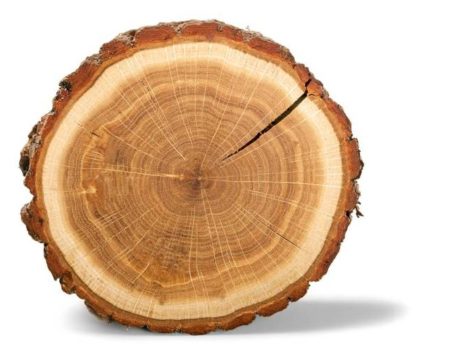 Our Newsletters: From the Archives

It All Begins with Tree Rings

In this edition of the Midland newsletter, we take a closer look at wood grain, the beauty of which originates from a tree’s growth rings. Rings not only track a tree’s age, they record the conditions under which the tree lived each year of its life, in rain or drought, even if it survived a fire. When grain is on view, the story of the tree lives on in the cabinetry and millwork.

Shown below, a close-up of the rift sawn white oak used in the wet bar (pictured above) created for a showcase San Francisco home. You can clearly see the vertical nature of the cut and the grain pattern, which embodies the linear, sleek look desired in today’s modern styling.

In terms of working with the two grain choices, closed grain has a smoother surface, while some open grain varieties need a filler to flatten and smooth their surfaces.

The Final Look: A Cut Above the Ordinary

A woodworker worthy of the title must first understand intimately, from the inside out, what he or she is working with: a tree. Knowing the anatomy of a tree — from its pith to its bark — is the only way a true craftsman can anticipate the success of the final product.
For Rob Boynton, founder and CEO of Midland Cabinet Company, wood grain and the tree rings that create the elegant and often mesmerizing grain patterns are the magical components. Even after 55 years in the business, Boynton admits, “I’m always amazed at what I see.”
Boynton and the Midland team also know that the wood grain they choose to enhance home interiors depends on how the sawyer cuts the raw lumber.
Most often, especially for high-end contemporary cabinetry and panels as shown here, that cut is rift sawn.

When a tree is cut, the pattern — or figure, as it’s called in woodworking — represents portions of the tree’s annual rings. Plain sawn is the most common cut for standard uses, while specialty cuts like quarter and rift sawn are the primary choices for producing stable, strong wood with straight and prominent grain lines. The sought-after more linear nature of rift sawn wood is the result of milling the lumber perpendicular to the growth rings at an angle of between 45 to 75 degrees, which exposes the grain evenly on all sides of the lumber. The most expensive cut, rift sawn was commonly used in Mission and Craftsman design and remains a favorite among artisans.

About the time Rob Boynton started Midland in the mid-1960s, interior design tastes had switched from a preference for softwoods like pine and redwood to hardwoods, a trend that continues today with the popularity of hardwoods such as oak, maple, walnut and mahogany.
Hardwoods are either open or closed grain, a distinction that is dependent on the pores, or cells, in the tree’s trunk that transport water and other nutrients upward through the tree.
Rob uses the analogy of a bundle of drinking straws: the openings represent the pores. Larger pores are considered open grain, and they are visible to the eye. Smaller pores create a closed, or fine, grain.
Ash, oak and mahogany are open grain woods. Closed, or fine, grain woods include cherry and maple. Walnut is halfway between the two.
In general, Rob notes that both red oak and white oak are always a favorite for their hardness and straight grain.
“They’re considered a high-end material,” he says of the oak varieties, “and are especially popular when working on contemporary design projects for the natural linear nature of the grain.” 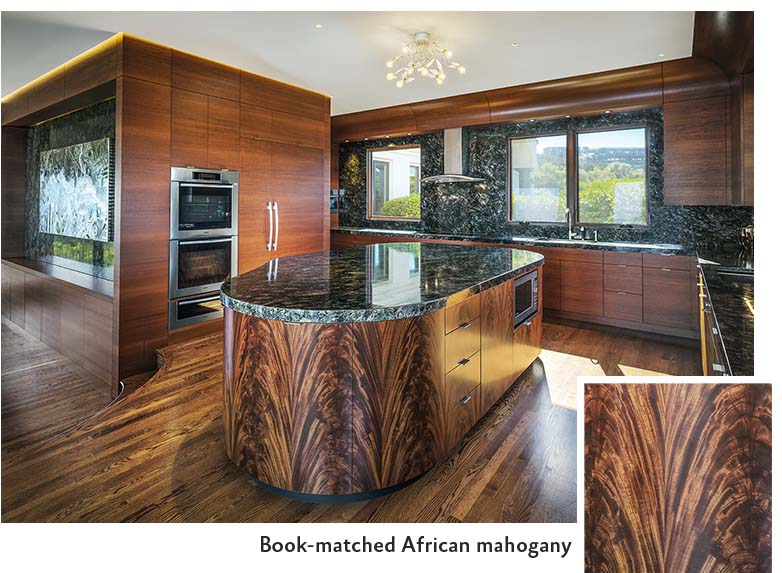 Architectural wood veneers open up new worlds for highlighting grain, and it is territory that Midland is very much at home in.
Take this dramatic customized kitchen. Bathed in African mahogany, the panels and cabinetry maintain the modern styling by calling on the elegant simplicity of mahogany grain.
The showstopper was saved for the island.
Here, we used a crotch cut from an African mahogany tree. A prized cut for its strength and intricate ring patterns, it comes from the trunk where the limbs branch. We then book-matched the grain on the island’s curved panels.

Book-matching veneer is an exacting process: like facing pages in a book, the two veneer panels must mirror each other exactly. It’s worth the effort: The result is a visual treat. 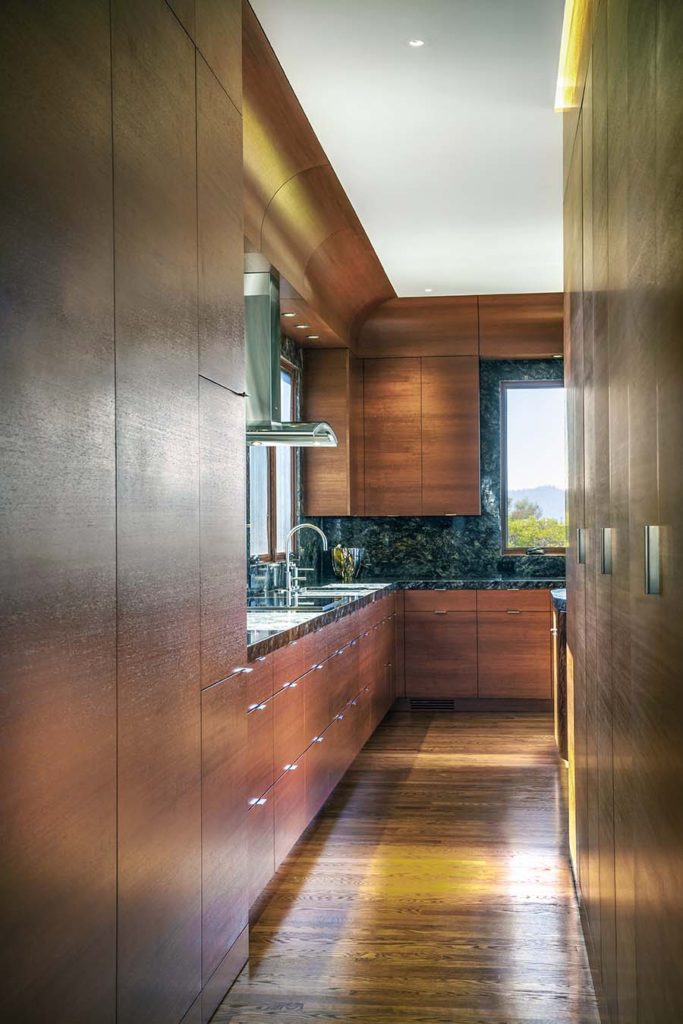