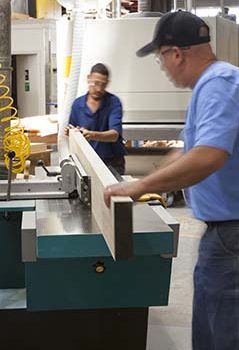 Since the day Midland Cabinet opened 52 years ago, founder and CEO Rob Boynton has offered his cabinetmakers off-hours use of the company’s fabrication facility to work on jobs for themselves, family or friends. All personal jobs are cleared by Rob, of course, but once an employee signs on to do the outside work, Rob steps back.

The employee is the sole contact, negotiating price and setting delivery dates. They pay a 10 percent surcharge for their materials to help offset shop costs, like electricity.

Rob isn’t sure if the Midland offer is unique, but he has yet to hear of a similar program at other cabinet companies in the Bay Area. Best-selling author of In Search of Excellence, Tom Peters, learned about the program when he and Rob met briefly years ago.

Peters was impressed, and included Midland’s program in a later book, writing, “The privi­lege broadens employee skills and improves their business acumen . . . ”

The business acumen that employees gain is an important side benefit for Midland, as Peters also notes — and Rob confirms: ” … having his cabinetmakers build their business skills and learn to deal effectively with customers shows clients that Midland work­ers can handle any job — large or small.”

Still very much a part of the company culture today, the idea came naturally to Rob, who began his cabinet-making career as a teenager working at a shop during the week and doing his own projects on weekends.

While it gives employees a way to make extra income, Rob also sees its value in the long term. “When you allow employees to work for themselves, it gives them a sense of entrepreneurship. It’s motivating,” says Rob. It also hones their professional skills: “They have to make all the decisions, plan their time, estimate job time,” he says.

Over the years, upwards of 50 employees have taken Rob up on his offer. Some have worked on more than a dozen outside jobs a year; others have gone on to open their own shops. Of those who have moved on, “We stay on friendly terms,” says Rob, adding, “and sometimes I’m able to send work their way.”

Still others have remained at Midland, where the low turnover rate is worth noting: “We’ve got cabinetmakers who have been here for 20 years,” Rob reports.

What Tom Peters Wrote About Midland’s Employee Program in His Book, Liberation Management

“Robert Boynton, Jr., owner of Midland Cabinet Company of San Carlos, California, promotes entrepreneurship among his 20 employees­ and improves customer service along the way. Employees can use Midland’s new multimillion-dollar facility after hours to work on outside jobs. Boynton charges them 10 percent over materials costs. Workers have to be on board for three months before getting a key, which allows them to come in on their days off.

“Boynton refers customers directly to his employees if a prospective job is too small for Midland to do profitably, or if the shop is too busy to take it on. Some Midland employees do a dozen or more outside jobs a year. The privi­lege broadens employee skills and imp roves their business acumen, workers claim. They learn how to set prices, negotiate their own deadlines, and cut down on waste time, which makes them faster and more effective during the regular workweek as well. Boynton doesn’t manage the relationship between / employees and their customers once a job is referred. The worker is fully accountable—to himself and his peers.” One guy wasn’t delivering well at all , and that hurt everybody ‘s credibility, but the boss wants to keep this privilege going because it broadens us,” one cabinetmaker told us. “The guy did finish the job, but not without a lot of nagging. He wasn’t reprimanded but he eventually left [Midland]. The company stays out of it , but if you mess up, they definitely won’t recommend you for other jobs.” Employees are also responsi­ble for judging whether or not their extra jobs will eat into their energy during the regular workweek.

“Workers end up learning so much about running a business that a half­ dozen cabinet shops have started as spinoffs from Midland. Boynton is a proud papa. He adds that having his cabinetmakers build their business skills and learn to deal effectively with customers shows clients that Midland work­ers can handle any job—large or small.”

Proudly Made in San Carlos, California

Locally made in our fabrication facility in San Carlos, Midland’s cabinetry is free from a range of noxious, toxic chemicals, including formaldehyde, banned by the State of California. We use low-VOC (volatile organic compound) glues, finishes, and stains, and we offer fine wood certified by the Forest Stewardship Council (FSC).